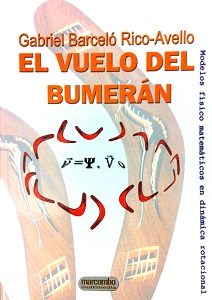 “This book represents the fruit of a great deal of well grounded work and stands as an example of industrious research driven by a simple and pure desire to know”. Federico García Moliner (1992 Prince of Asturias Award Laureate for Technical and Scientific Research).

Gabriel Barceló published the El vuelo del Bumerán as an introduction to the Theory of Dynamic Interactions. Approaching the issue from the perspective of an “apologia for inquisitive thought”, the book puts forward a new rotational dynamics physico-mathematical model and revives a forgotten debate on rotational dynamics.

The book is divided into four parts:

The results of this simplified model are computer simulated and their similarity to normal phenomena, specifically, the true flight of the boomerang, are revealed.