The Flight of the Boomerang (El vuelo del Bumerán) puts forward new dynamic hypotheses for non-inertial systems that could prove to be trail blazing for the world of physics. Clearly unorthodox, the new theory being proposed will no doubt give rise to a long, drawn-out controversy before being accepted. 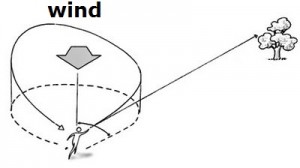 The theory holds that when a rigid body is subject to successive force couples, the first momentum will cause its intrinsic rotation, but the subsequent non-coaxial ones will generate a non-homogenous velocity field, which we can identify as an anisotropic distribution of acceleration which, mathematically speaking, can be conceived of as an inertial force field. If the rigid body also has kinetic translation moment, a coupling will occur between the translation velocity field and the anisotropic velocity field caused by the second moment, thus obliging the centre of the moving mass to modify its path, without any external force having been applied in that direction. Accordingly, there will be a transfer of kinetic rotation energy to translation energy, and vice versa, in dynamic phenomena dealt with under this hypothesis.

The Theory of Dynamic Interactions that is put forward in Chapter XII of The Flight of the Boomerang (El vuelo del Bumerán) may have a significant effect not only on the principles of dynamics, but also on astrophysics, cosmology, atomic physics, etc.

The text proposes a view of nature in which bodies endowed with intrinsic rotation do not behave in accordance with the laws of classical mechanics. Based on non-Newtonian hypotheses, this new proposal can easily explain the paradoxical and surprising flight of the boomerang and the dynamic behaviour of a host of bodies that are difficult to understand under the umbrella of classical mechanics. Indeed, it puts forward key arguments for a new interpretation of how galaxies and Saturn’s rings behave.

The Theory of Dynamic Interactions generalises the idea of the gyroscopic torque, along with that of other inertial phenomena, bringing them together in a unified structure of a new, non-inertial rotational dynamics. Notwithstanding, the Theory of Dynamic Interactions, which is simple in structure and easily applicable to, as yet, numerous, unexplained physical phenomena, demands a new understanding of mechanics, proposing new inertial hypotheses for matter.